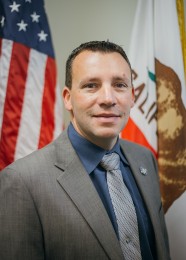 Trustee Vado began his law enforcement career in 1995 with the San Jose Police Department. Vado was elected as a director of the San Jose Police Officers’ Association in 2009 and was elected to Chief Financial Officer in July 2010. In November 2010 he was elected to the Insurance and Benefits Trust of PORAC. He served as Chairman for the Insurance and Benefits Trust of PORAC from November 2019 to November 2021, when he was appointed as the Retired Associate Member Representative.